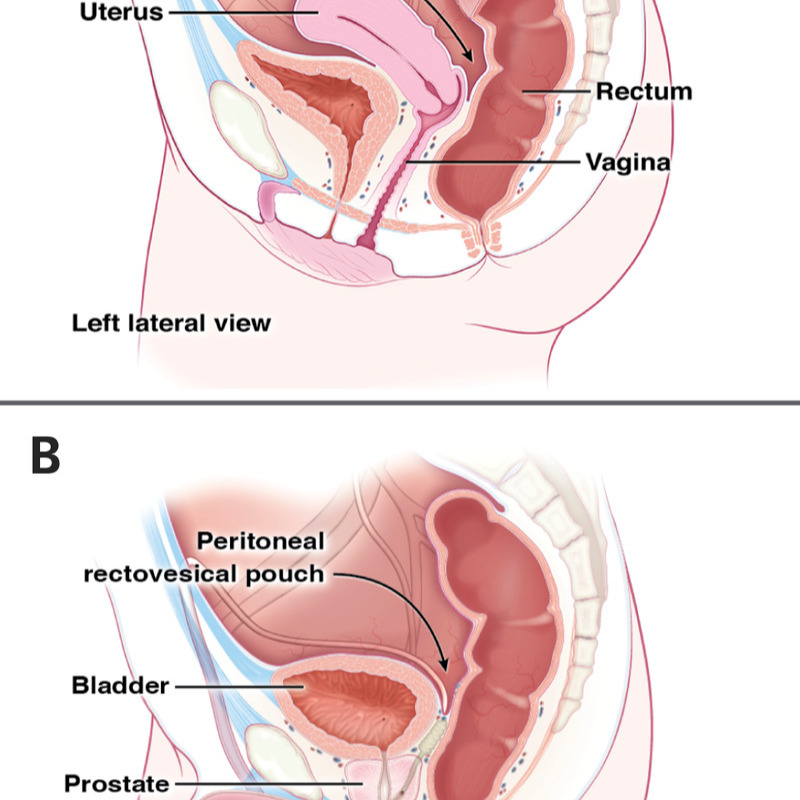 The three sections or parts of the EAS are clearly illustrated below (see parts A, B and C).

Problems with the outer sphincter

Most people open their anus on a daily basis to pass solids as wide as an average erect penis and could comfortably accommodate something wider than what they pass. To open the outer sphincter as wide or wider than the average cock is as easy as having a shit.

But relaxing the outer sphincter is only going to reduce the pressure on your sphincter by 15% because the inner sphincter is still clamped tight and if you force that open it is going to hurt.greatly.

Problems with the inner sphincter

Being mentally and physically relaxed is important to the process of opening the inner sphincter, so a fear of shitting in the middle of proceeding is a show stopper for both sphincters. Even if you consciously over-ride your fear and start pushing out to open the outer sphincter, the inner sphincter is not going to let go while there is any fear or anxiety. Here again is why enemas are so often recommended. It is to make sure you passage is clear and you are mentally comfortable.

Control of the inner sphincters is a semi-Autonomic response (see: Autonomic nervous system). The internal sphincter responds automatically to pressure from stuff accumulating in the rectum. When pressure is put on the inner sphincter from the inside it starts to “let go”. That is when you experience the sudden urge to poo. But you can consciously control you outer sphincter to stop yourself shitting. You don’t just shit as soon as you get the urge, just because the inner sphincter recons it is time to do so.

This is why pausing just as you get past the outer sphincter is standard advice. The inner sphincter will respond to the pressure as long as the Receiver is calm/relaxed. It can be a great help for the receiver to take control in the initial stages. Position is everything to give the receiver control. Even if the Giver initiates proceedings, it can help greatly to get the tip of the penis (or toy) in and then stop and wait and let the Receiver control the next step of the penetration, when they are ready. That is to say when they feel the internal sphincter relax. Many don’t even realize that it is the internal sphincter relaxing that makes them feel read for more penetration.

So you take the initial penetration in stages. Pushing out to pass the outer sphincter and even while you are still pushing your ass out, wait for the relaxation of the inner sphincter before pushing through. The Receiver should try pushing and then resting repeatedly to let the cock slide in.

Problems with the overwhelming urge to poo

The inner sphincter’s response to pressure from solids can become a problem once the ass is fully penetrated. An overwhelming urge to run to the toilet just as you are getting started is a very common problem for beginners. As soon as something passes through the inner sphincter the autonomic nervous systems tells the brain it is time to poo. The receiver often feels an uncontrollable urge to shit which sends them running to the bathroom.

Most need to be confident that the urge is not from shit that will end up all over their partner or the bedding, so again if the Receiver has had an enema to clean out their back passage then you know there is no need run off.

Problems caused by the angles

The next issue is only seen when you look at a side cross-section. It is the same for males as it is for females.

Normal positioning of the Anorectal flexure

The anorectal flexure join between the anal canal and the rectum is intentionally choked shut by yet another muscle you have to coax your way past. In some people this turn can be a very sharp bend, in others not so much (as shown by the different depictions of the human abdomen above, and it has nothing to do with being male or female). This sharp turn (also called the Anorectal Angle) is maintained by a very important muscle called the Puborectalis muscle that hooks around the top of the anus. Because it is not seen as part of the muscle structure of the anus or rectum it is commonly overlooked.

Straightening out the Anorectal flexure

Remember also that part of the “Fight or Flight” response of the body is to tighten all these muscles. This is the single biggest issue for people have trouble with latent anxiety about having their ass penetrated. Being in the mood is so important. This is why there is such polarisation between some people who just don’t have a problem with anal sex and others. The good news is that the body makes its own adjustments as the mind and body get use to the idea of something being pushed in there. That is why wearing a but plug is so good for training. It is more about training the brain and nervous system than stretching the muscles.

Position will help when you are first being penetrated. It is especially beneficial if you are not good at controlling those important muscles with will power alone.

This is why so many say it is better if the Bottom starts off on top and more specifically starts in a squatting position and trying to poo. Other very effective starting position is the Yoga Child’s pose which can easily transition to doggy style. Many find Spooning, lying on their side, to be a very mentally and physically relaxing position. With the receivers knees bent up to their chest it is also a position that lends itself to pooing action for easy entry. Finally there is Happy Baby. It hands a lot more control of the penetration to the top, but it also allows clear access and for them to adopt a very stable kneeling or standing position, minimising the amount of fumbling they might do otherwise. All of these positions allow the receive to take control of the rate of penetration as well.

So if you get pasted the sphincters and the Puborectalis then there is a new kind of pain to avoid. A pain that is much harder to pin down, where it is or what it feels like. That is because internal distress often results in Referred Pain.

This pain can be a result of failing to navigate the Anorectal Angle and pushing straight into the wall of the rectum above the anus. It may not just be the rectum complaining. In the case of a male, right behind the wall of the rectum above the anus is the prostate and seminal ducts which you might be squashing. For a woman it could be the cervix or uterus. Body positioning and the angle of the penetrating object can dramatically ease navigating the Anorectal Angle. If you lean back the kink becomes sharper. Crouching forward, literally try to put you head between your knees, will straighten this section out. The chart provided by Wiki suggests quite specific locations for referred pain, but internal distress is often just referred as a head ache or pain in the neck or back.

But we are not all the way in there yet. Next you have to worry about the intestinal folds. Use gentle gyrations as you insert further to ensure you are not pushing the tip into and behind one of the folds.

Then there is the “POP” sensation and an associated sharp pain which is likely a referred pain. This can be caused by forcing either of the sphincters open before they are ready. Pushing passed the Puborectlis muscle before it is ready or pushing a straight object through the Anorectal bend or pushing past one of the Transverse rectal folds. To stop a savage POP and other referred pain, the Bottom must do the pooing thing while the Top works on navigating the channel.

The Top starts the entry by aiming for the belly button to pass through the line of the sphincters (the anal canal). Then you tilt things gently toward the back to follow the spine while not over stressing/stretching the Bottom. At this point it is again important for the bottom to try pooping things out. This is again a natural act that will pull rectum and anus more in line. As you go deeper you start tilting things towards you front again, following the line of the spine and giving the Transvers folds time to get out of the way.

As the body (ass) gets more used to things going in, as opposed to coming out, you will find that you need to worry less and less about all this maneuvering. The mind will learn to control all the muscles down there independently. But the first step is to simply try and do a poo when you are working something in. Just start by getting the tip in and then pushing it back out with your ass. As you try pushing out with your ass, start pushing the dildo (or whatever) in gently. Then let it be pushed out again and while still pushing out, push it back in with your hand.

This popup will close in:

Our shop is online again!

We are just in the final phase of preparing to launch an all new website designed to improve functionality and usability.

As a result, user registrations, logins and the shop will been suspended from time to time.

You might also get a sneak peek at the new look! Catching us switching between the new and old website as we test everything.

Apologies for any inconvenience.